I have memories of my father’s gloved hand holding mine while walking in the snow on the plaza when I was six or so after dining at McDonald’s. All the store windows were dressed up for Christmas and the toy store was like a fairytale land. This memory is forever in my heart, especially during the holidays.
Few things have a hold on me like the Kansas City Plaza lights at Christmastime.
Last night, I was blessed with the opportunity to stop and take a look at the lights from an upper view that was as romantic as it was breathtaking. This city has always been my home, but at Christmastime it takes on this magical power that transports me back to my childhood and all things wonderful.

I was talking to a lady last night about the plaza and she asked, “what’s the big deal? Why does everyone refer to it as ‘on the Plaza?” You don’t ever hear people say “on Zona Rosa” like it’s a big deal.

You see The Country Club Plaza has long been revered as a place of affluence. Long ago, if you bought something on the plaza, it immediately took on more value, and so did you. While we took in the sights, I was doubly blessed to be wearing something that not only has Plaza history, but family history as well—my hubby’s late grandmother’s coat. Just look at this label! 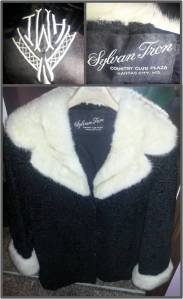 The plaza lighting ceremony dates all the way back to 1930. What used to be a single strand of lights over a doorway has become 15 blocks of beautiful lights, and a MUST SEE for anyone in KC during the winter. I’m sure there’s millions of people with similar stories about the plaza (and I’m sure many of you think of it as your special place), but it will forever be where my heart calls home.

A huge thanks to my hubby for going out of his way again to give me another magical Christmas memory.