The Kansas City Regional Association of Realtors brought Lawrence Yun, NAR’s Chief Economist, in to shed some light on what the real estate industry can expect in 2014.

Right now, inventory is bouncing at 13 year lows. This has contributed to our rising prices and a new crop of For Sale by Owners. Nationally prices have continued to rise in the double digits throughout 2013 and with the current inventory shortage, this should continue through 2014. We all have witnessed some areas of Kansas City tracking at a good rate, so please visit my previous blog posts or contact me to find out the exact numbers for your particular area.

Dr. Yun stressed the importance of our need for more new construction, as new construction inventory is at a 50 year low. He said new home starts need to reach 1.5 million or we will have a persistent inventory shortage nationwide. Kansas City’s housing starts are at about half of their average. Another interesting stat showed us the gap between new and existing home prices is larger than it’s ever been. The only way this can be fixed is to have a dramatic increase in resale home prices. Right now, we are battling appraisals on about every other transaction. Consumers can rest assured real estate agents in Kansas City are fighting the battle against low appraisals with fervor. We are doing our best to keep those prices moving! 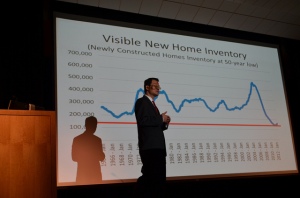 One of the most surprising stats was the fact that 30% of the transactions are cash. Lawrence stated further studies have indicated many parents have purchased homes for their children with cash and they are actually becoming the ‘lender’, having the payments with interest paid to them instead of a bank. Others are paying cash for the house to make their offers more appealing than the others that would be bidding on the same property. After the home closes, they are taking out Home Equity loans to finance the property and have the tax benefits from doing so.

The rental population continues to grow with home ownership flat lining at 64%. Home ownership is primed to grow, according to the historical data, but enough jobs have to be created in order to get renters into homes. The rental market is dealing with a large amount of college graduates with high debt and inadequate jobs. Actual household formation is increasing, it’s been low since 2007. Unfortunately, it’s not yet turning into an increase of new home buyers. However, the current wealth of homeowners is at a staggering amount, while the average renter has about $4000 total wealth. (A great reason to purchase a home!) 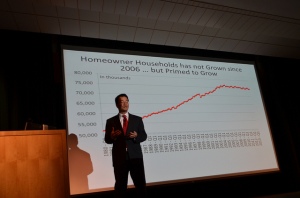 Some good news? Missouri and Kansas’ shadow inventory of distressed property is not only lower than the U.S. average, but has also shown only gradual changes (with the exception of the 2010 spike) over the last 13 years. There are bubbles in other areas that will hit soon, New York is one of the highest, almost double that of the entire U.S. 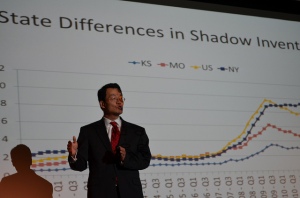 Interest rates will remain low, taking into account they were at 8% or higher 13 years ago. Dr. Yun stated they should increase to 5.3% by the end of 2014. 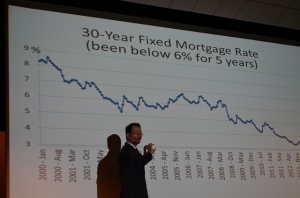 He predicted steady sales throughout 2014 with no increase in the number of sales, but the increase in home prices should help offset the lack of growth.

Another note, there has not been a meaningful increase in REALTOR membership which means less competition overall.

I felt this was one of the better forecasts as it seems more realistic than it has in year’s past. Trust me, there’s been several years we’ve left this forecast wanting to jump off a bridge and last year was full of unknowns. Since we’re finally seeing some steadying in the market, the economists are leaving less to chance and making strong predictions. To me, this in itself is positive.

Special thanks to Dr. Lawrence Yun for making the trip to Kansas City. Click here for all the slides from the presentation.